When borders were open and hotels filled with guests, SoftBank-backed Oyo was hurtling towards its stated aim of becoming the largest hotel chain in the world. But now its prospects look very different.

It has retreated from the US and Europe and cut its 30,000-strong global workforce by two-thirds. Launched in 2013, Oyo has yet to turn a profit while SoftBank has slashed its valuation of Oyo from $10bn in 2019 to $3bn and in recent weeks ended their Latin American joint venture after just six months.

“Growth will be moderate in comparison to what it was earlier,” Ritesh Agarwal, Oyo founder and chief executive, told the Financial Times, as the company focuses attention on hotels in India and south-east Asia and short-term rentals in Europe.

Investment in China, the UK and the US, markets previously at the heart of Oyo’s international ambitions, would be “very limited”, he added, conceding the group was unlikely to be “market leading” in those regions. Its number of rooms has fallen 16 per cent, Oyo said.

Backed by billions in investment from SoftBank and venture capital firms including Sequoia Capital and Lightspeed Venture Partners, Oyo had attempted to replicate its success signing up budget Indian hotels to adopt its branding and booking technology to expand rapidly around the world.

It ballooned into one of China’s largest hotel chains by rooms after launching in 2017, before entering the UK in 2018 and the US the following year. It expanded into Europe with the $415m acquisition of vacation rental business @Leisure from Axel Springer.

At its peak Oyo claimed to have 1.2m rooms in 80 countries, targeting independent operators struggling to compete with larger chains. But the speed of the expansion was fraying the company even before the crisis.

It was bleeding money in core markets, with a policy of minimum guaranteed monthly payments to hotels often forcing it to fund lossmaking businesses. Oyo, which has now shifted to a revenue-sharing model, has not released results for its financial year ended March 2020. The previous year its net losses multiplied sixfold to $335m.

Last year Oyo racked up monthly losses of up to $15m as the pandemic closed hotels and curbed travel but the situation has “improved”, Agarwal said.

In India, its largest market and where occupancy rates are about half that of pre-Covid levels, Oyo has pulled out of hundreds of cities while consolidating an array of side-businesses from trendier hotels to co-living. It said these ancillary brands were “recording healthy signs of recovery”.

Doug Pudney, a longtime hotel industry executive who was acting head of its UK operations, said he doubted Oyo would still be in the UK by the end of the year. “There are global issues [for Oyo] in a very big way but they will use the pandemic to put the blame on to Covid and not take a body blow.”

Oyo said: “The welfare of our employees and our work culture is of utmost importance to us and we hold these to the highest standards.” It added that it was “natural” for past employees to criticise.

Still, three former UK staff said that Oyo had regularly added hotels that were unviable while attempting demonstrate high growth rates. One instance was a small hotel on the island of South Uist off Scotland’s north-west coast.

“It would cost you more to send the team to see the property than you would make in commission for the entire year,” said one employee.

Oyo said it carried out “an in-depth revenue forecast” with each property but added “our signings are not perfect and [we are] getting better on identifying the most viable hotels”.

But hoteliers across its geographies have complained that Oyo pushes prices to rock bottom in order to fill rooms and meet targets, while squeezing owners’ margins to almost nothing.

Oyo said that its pricing algorithm was based on “changing demand trends” and local factors, and that it was designed to improve net revenues at hotels.

“They give all these empty promises to hotels,” said Vikram Shetty, a member of the hoteliers association in Pune, a city in western India. “People are sick and tired.”

In China and India hoteliers rebelled over repeated delays in paying the minimum income Oyo guaranteed, while its aggressive pursuit of growth prompted probes by Indian competition regulators. Oyo says it is “fully compliant” with regulations. 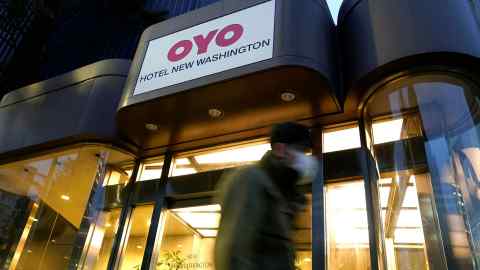 Agarwal said that Oyo had changed its algorithm to allow hoteliers to adjust prices by 10 per cent, which he said had reduced complaints from hotel owners on room tariffs by 70 per cent. He is also overseeing the technology more closely and said that Oyo was adding “30,000 to 40,000 rooms a month”.

In January the company announced $7.8m funding from Hindustan Media Ventures, as well as an undisclosed sum from the Swedish billionaire Martin Soderstrom, who joined the board of Oyo’s European vacation rental business.

Oyo had about $1bn cash last September but Agarwal said that monthly outgoings had eaten into that. “With the capital we have, we should be able to safely build a good underlying business,” he added.

Agarwal is anticipating “a substantial recovery . . . fingers crossed” but stressed this could be a temporary reprieve “because we don’t know when the third wave or fourth wave comes”.